Portal monitors (vehicles and containers) are unattended monitoring devices that can be used to screen items entering or leaving a facility, for example to detect the transfer of undeclared items, perhaps nuclear materials.

Portal monitors (vehicles and containers) are unattended monitoring devices used to screen vehicles or containers. Such screening could be based on one or several sensors, for example radiographic imaging to obtain the shape of objects, or radiation measurement devices to detect the presence of nuclear materials such as uranium or plutonium.

As part of the Intermediate-Range Nuclear Forces Treaty, inspectors could use radiographic imaging to inspect if the interior of vehicles contained prohibited types of missiles. For this purpose, continuous portal monitoring sites were operated at manufacture sites.

Radiation portal monitors can be deployed anywhere where passing traffic must be screened for radiological and nuclear materials. In the verification context, they can be used to screen items entering or leaving a facility. For example, they could help detect that no undeclared transfers of specified nuclear materials take place between facilities. The output could be the exact measurement results, or a pass/fail signal.

In order to detect nuclear materials even in the presence of heavy shielding, active radiation portal monitors can be used. Instead of relying on the radiation naturally emitted by nuclear materials, a gamma or neutron radiation source would be part of the portal monitors. It would be directed at the vehicles or containers to be inspected. The purpose of such a source is to induce additional radiation from the item, as the radiation source could induce reactions in nuclear materials. Such induced radiation (also neutrons or gammas), can have characteristics that make them much more difficult to shield than the passively emitted radiation. The main disadvantage of active portal monitors is the costs to build and deploy active systems, which are significantly higher than for passive systems.

Either as a stand-alone measure, or to support the analysis of data from radiation measurements, portal monitors could make use of additional systems, among them video surveillance and infrared sensors. 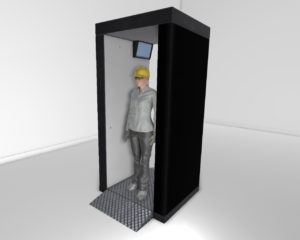 Portal Monitor (inside)
Portal monitors can be used to detect the movement of nuclear materials. More »
Back to All Technologies