Portal monitors (inside facilities) are unattended monitoring devices that can be used to detect the movement of nuclear materials, for example to help verify warhead dismantlement.

Portal monitors (inside facilities) are unattended monitoring devices used to screen containers and other items as they move through the point inside the facility where monitor is located. In particular, such portal monitors can be used to detect the presence of nuclear materials such as uranium or plutonium. This could be achieved by using detectors that measure the count rates of gamma and neutron radiation, which is emitted by such materials. By using multiple detectors located at different locations along a path, the direction of movement could be determined.

Portal monitors may be operated in areas within facilities, that are considered very sensitive, i.e. where there is a risk of disclosing classified information. As a result of that, treaty parties will need to ensure that a portal monitor is technically unsuited to obtain and disclose such information. It must also be ensured, that none of the parties has tampered with the device, for instance changing it to give false results. For this purpose, tamper-indicating enclosures are required.

Generally, a portal monitor would measure gross count rates. It may be that some states considers these sensitive, and will require a portal monitor not to reveal this measurement information, but instead only give a pass/fail output, indicating whether count rates are below or above a defined threshold.

Portal monitors are one type of verification technology to support the continuity of knowledge during warhead dismantlement. Other technologies monitoring the movement of items are for instance video surveillance, or using seals on doors to know whether they have been opened. There are benefits in using multiple technologies to have redundancies should a technology fail. 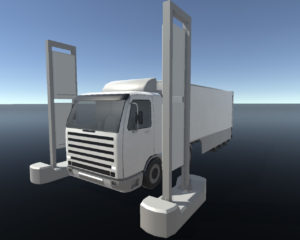 Portal Monitor (outside)
Portal monitors for vehicles can monitor the transfer of items between facilities. More »
Back to All Technologies