In the late 1990s, Los Alamos National Laboratory developed and demonstrated a number of systems that provided continuous, live sensor data to inspectors outside the facility in order to eliminate the need for information barriers and encryption.

The Magazine Transparency System (MTS) is one of these systems. It is designed to monitor treaty-limited items during either short-term long-term storage and detects unauthorized movement of weapon containers from the facility. Only passive tags and seals are placed on storage containers to reduce host country safety and security concerns, and to eliminate the problems associated with finite battery life. The key element of the system are so-called MAGTAG blankets, which are used to cover all storage containers. The blankets contain randomly oriented rare earth magnets generating a complex magnetic field in the room. A highly sensitive magnetometer continuously measures the magnetic field within the magazine and detects small changes in the field caused by the (illicit) movement of the magnets randomly sewn into the MAGTAG blankets. 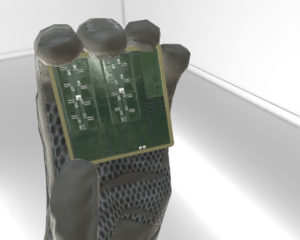 Electronic Seal
Electronic seals are tamper-indicating devices using an electronic component. More »
Back to All Technologies