Procedures and techniques to confirm upper limits on the number of nuclear warheads will become a key verification objective should future arms-control agreements place limits on the total number of nuclear weapons in the arsenals. Verifying such agreements would then require the ability for inspectors to account for individual warheads (rather than launchers). In principle, this can be accomplished by tagging treaty-accountable items with unique identifiers (UIDs), which transforms a numerical limit into a ban on untagged items; but, tagging may be difficult in practice because the host may have safety, performance, or other concerns, and inspections would necessarily be highly intrusive. A fundamentally different approach to confirm numerical limits could be based on privacy-preserving declarations alone and avoid entirely the need for tagging. Hashed declarations may offer such a solution. They would not list the locations (or other relevant data) of treaty-accountable items in cleartext; instead, only, a hash (or “message digest”) of each entry would be made public. Such a hash is much shorter than the original message itself, but the underlying cryptographic hash function is designed such that it is extremely difficult to find a valid message for a given hash or to construct two different messages that produce the same hash. In preparation for an onsite inspection, the inspecting party would announce the storage or deployment location that it would like to inspect, and the host party would then provide the cleartext for all treaty accountable items that are present at the selected site. Similar to tagging schemes using unique identifiers, this concept prevents the host from storing excess (undeclared) treaty-accountable items at declared sites. 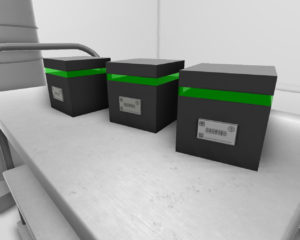 Buddy Tag
Buddy tags can be used for warhead accountancy with on-site inspections. More »
Back to All Technologies