Buddy Tags are tokens that are physically separate from the treaty-accountable item, but the inspected party must be able to produce one tag for each item without delay. This procedure can be used to demonstrate treaty compliance.

Next-generation nuclear disarmament treaties may place limits on the total number of nuclear weapons, i.e., including both deployed and non-deployed warheads. Verifying such agreements would require the ability of inspectors to account for individual warheads. Attaching unique identifiers directly to warheads could be problematic due to a range of concerns by the host related to safety, security, and intrusiveness. To resolve this dilemma, Sandia National Laboratories first proposed the so-called “Buddy Tag” concept in the early 1990s. Buddy Tags are tokens that are physically separate from the treaty-accountable item, but the host must be able to produce one tag for each item without delay. Verification would rely on short notice inspections. Sensors in the Buddy Tag would show that it had not been moved to the inspected site after the inspection was declared (for example, within the last 24-48 hours). If the inspector counted more treaty-accountable items than Buddy Tags at the inspected site, a treaty violation could be asserted. Using a number of single-site inspections, an inspecting party can hold the host at risk for discovery of violating the treaty at an enterprise level by possessing more warheads than the treaty allows. 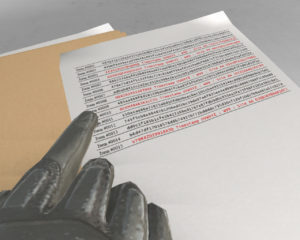 Hashed Declarations
Hashed declarations are privacy-preserving declarations and equivalent to tagging schemes using unique identifiers; they enable an inspecting party to confirm upper limits on treaty-accountable items. More »
Back to All Technologies