Launched in 2011 with seed-funding from Global Zero and The Simons Foundation, the Princeton team has been developing a warhead verification approach based on the cryptographic concept of zero-knowledge proofs. The original concept was published in a Nature article in June 2014. Since then, the team been working on the development of a zero-knowledge object-comparison system and the procedures for its use in nuclear warhead inspections.

The demonstration of such a system has been recently outlined in a Nature Communications article published in September 2016 (see video from the Princeton Plasma Physics Laboratory). This page summarizes briefly the main challenges of nuclear disarmament verification and outlines the concept of zero-knowledge warhead verification.

Zero-knowledge proofs are mathematical cryptographic methods to demonstrate the validity of a claim while providing no further information beyond the claim itself. Originally developed for computational applications, the Princeton team has translated this mathematical concept and build a physical system that manifests the same fundamental properties. Our zero-knowledge object-comparison system can show that some objects are identical (in geometry and composition) without revealing what these objects are. Such a technique could form the basis of a verification system that could confirm the authenticity of nuclear weapons without sharing any secret design information.

The current set-up is located at the Princeton Plasma Physics Laboratory. It consists of a collimated fast neutron beam, a 1D array of superheated droplet (bubble) detectors and an object holder where 2”-cubes of different materials can be arranged in different patterns. The system allows to perform zero-knowledge comparison of these different patterns.

The Princeton team has recently performed measurements on highly enriched uranium at the Nevada National Security Test Site. The team is also building a new iteration of the system located at PPPL including a new collimator housing our new and more powerful neutron generator. The goal is to allow for both transmission and neutron-induced emission measurements at the same time. The project team is also developing a new bubble reader to increase our measurement statistics and be able to distinguish smaller variations between objects. Francesco d’Errico at Yale university is providing R&D support by designing new detectors for our next round of experiments. 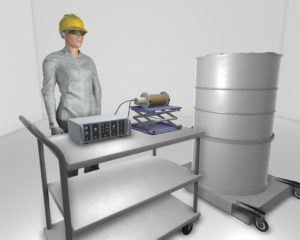