Modal vibration signatures might be used to identify a particular treaty-accountable container or container/object system, or provide evidence of tampering.

Modal testing is a specialized form of resonant vibration analysis often used for the purpose of structural identification, condition monitoring, and damage detection. From a nuclear weapon chain-of-custody perspective, it has been postulated that a modal vibration signature might be used to identify a particular treaty-accountable container or container/object system, or provide evidence of tampering. This preliminary work has mainly been conducted by the UK Atomic Weapons Establishment (AWE). In the paper linked below, the authors discuss their results relating to the potential uses of modal testing for deployment, tamper indication, unique identification and data analysis methodology.

The authors offer the following description of the modal testing methodology:

“All solid objects can be excited into mechanical resonance. An obvious example of this is the audible output when a bell is struck. The structure of the bell has inherent resonant frequencies; at a given resonant frequency the structure will assume a “standing wave” form known as a modeshape. The dominant modeshape results in the tone that we hear and will change if the bell is significantly altered or damaged. Modal testing is a specialized form of resonant vibration analysis which uses this property for the purpose of structural identification, condition monitoring and damage detection. From a chain of custody perspective, it was postulated that this structural testing method might also be used to uniquely identify a container with a given object inside, and highlight changes resulting from tampering. Future nuclear disarmament verification activities are likely to take place within a restrictive managed access regime. Therefore it was felt that the measurement system needed to be assembled quickly, portable, and easy to use. A typical modal testing experiment involves an excitation method, which imparts a force into the structure, and a response measurement looking at the acceleration, velocity or displacement of the surface. After consideration, a modal hammer was selected to provide and measure the force into the structure, and a tri-axial accelerometer was selected to record the vibration response in the X, Y, and Z directions. This choice does not rule out other approaches, but it was felt that this is the simplest approach to deploy and therefore a reasonable set-up for this preliminary experimental campaign.” 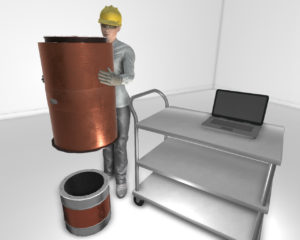 Eddy Current Methods
Verification methods involving eddy currents have the potential to support the goal of achieving just enough information to uniquely identify items without providing unnecessary information. More »
Back to All Technologies